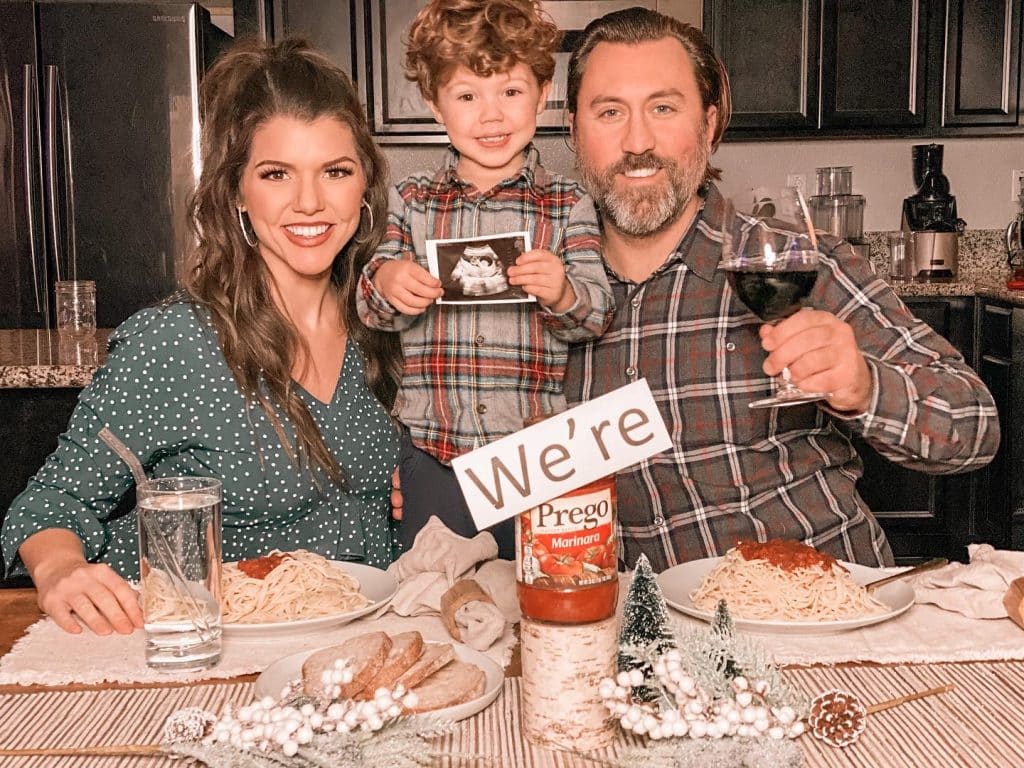 I'm so excited to announce that I'm pregnant with my second baby! This will be my second time having a fully plant-based, vegan pregnancy.

I've already been talking about it on my Instagram if you follow me there. And I have to say one thing I'm excited about with this pregnancy is documenting it a lot better than I did with Rowan! I get so many questions from mamas who are plant-based or want to be plant-based and have a healthy pregnancy so I'm hoping my journey can be a good reference for those mamas.

It is completely possible to have a healthy pregnancy and baby eating only plant-based food, but nothing that I share is medical advice. I'm just sharing my journey and what has worked for me. So let's kick it off with the first trimester!

It's because I was so sick with both of them. During Ro's pregnancy I was nauseous 24/7, but never actually vomited.

With this one, I had both but now that I'm in my second trimester I'm feeling SO MUCH better and I'm able to keep down some of those greens and other healthy foods. So, if you're in your first trimester I'm here to tell you, it will get better at some point!

As you might know, I was diagnosed with PCOS 6 years ago now. I was told by three different doctors that I'd never be able to get pregnant naturally….I'd have to do IVF or something.

But then I changed my diet and lifestyle and about 6 months later I got pregnant with Rowan naturally!

I'm a strong believer that our diet and environment impacts our fertility.

I wrote all about how I changed my life and healed my PCOS here.

For this pregnancy, it was just as easy. Actually might have been easier because it happened the first month we started trying.

Since I knew we were trying, I started taking tests as it got closer to my “time of the month” since some tests say they can detect almost a week before a missed period. It was about 6 days before my period and we were leaving for Santa Barbara the next day.

I was shocked and you can see in the video below Ro was SOOO excited! Since having Rowan, I wasn't sure I could handle another baby… As of right now I have zero help with Ro unless Ben isn't working, and being on TV plus running my own business means I work at night when he's sleeping or wake up early to get some things done, but no matter what I always feel behind on work.

When it came down to it though, I believed I'd regret not having another baby later on and this past year Rowan has been asking for a sibling pretty much every single day! So I thought, well let's try and if it's meant to be it will be. Sure enough it was meant to be since it happened so fast!

I truly believe I got pregnant so quickly because both Ben and I live a plant-based lifestyle. It's also very important what the man eats since studies have shown diet can affect sperm (higher intake of saturated fat = lower sperm count.) Animal foods are heavy in saturated fat! Also, the same environmental factors, like plastic use, can also affect men.

With both of my pregnancies now I've had terrible nausea during the first trimester. This pregnancy has actually been worse than when I was pregnant with Ro. And it shouldn't be called morning sickness… it's more like all day sickness for me.

Unfortunately, I don't think there's one thing that works for everyone in curing nausea, but the thing that helped me the most was ginger. There's actually research behind ginger for morning sickness too.

I drank ginger beer (nonalcoholic), and made ginger tea by slicing fresh ginger and pouring warm water over it in a coffee cup. Those were about the two only ways I could get it in.

Some say that Vitamin B6 really helps, but I didn't find that to be the case for me.

Something else to be aware of is making sure your prenatal vitamin isn't making you nauseous as this has been reported by pregnant women.

My best advice is to give yourself grace. Listen to your body. I barely exercised and ate the worst during this time because of how I felt, but it does get better, for the majority of us at least.

You'll soon start feeling better and be able to eat salads, smoothies and all the healthy foods you and your baby need.

I started feeling a little bit better around 12 weeks and I was eating back to normal by 14 weeks.

I recently did a Q&A on my Instagram stories and a lot of people wanted to know what was the “junk food” I ate since I wasn't able to eat a lot of healthy foods.

When I say my first trimester is the worst I've eaten, Ben (my hubby) always reminds me that my worse days are someone else's good days.

Even though I was eating more processed foods I made sure to stick with “healthier” processed items. I did eat a lot of bread.

Seriously some nights my dinner was just a few slices of bread because that's all I could get down.

Things like Ezekiel English muffins with Miyokos vegan butter was a go-to breakfast.

The Whole Foods brand of organic pretzels was a life saver and I'd snack on  Late July Chia Tortilla chips every once in a while too.

I NEVER craved pickles when I was pregnant with Rowan and wasn't sure if that was just a myth about pregnancy, but with this one I know it's true because I'm craving all the pickles!

If you can't tell, I had a thing for salty foods!

Thankfully, I was able to still eat some fruit. Mostly apples so I'd get a little nutrients there.

I encourage you, if you're eating similarly, or not your best, don't be too hard on yourself.  Guilt is also not good for us or growing babies and you'll eventually return to eating normal.

Like I said above, I'm not giving medical advice. Just sharing what I'm doing during my pregnancy based off my own research.

For the first trimester I've been taking this prenatal supplement.

Since I haven't been able to eat a lot of food, I think this is important for me right now. I do believe food is the best way to get the vitamins and minerals we need, but it's not always possible. Especially when you want to vomit 24/7!

I'm also taking this Vitamin D supplement, B12 and DHA.

Even though B12 is in my prenatal I take extra because the recommended amount is 2,000 mg per week for a pregnant woman. We don't have to worry about taking too much B12 because it's water soluble and we'll just pee out the extra. But 25% percent of pregnant women don't get enough B12 and this has been linked to brain issues in infants.

I prefer DHA over fish oil supplements as fish have shown to have high levels of mercury and other toxins accumulated from our polluted oceans and waterways that aren't good for mom or baby.

I take extra Vitamin D since it is winter and I'm not getting out in the sun as much as I do in the summer.

If you've read this far, I hope you took something away from this or at least enjoyed it. I'll be sharing more from this pregnancy in the coming weeks and I share daily on my Instagram stories.