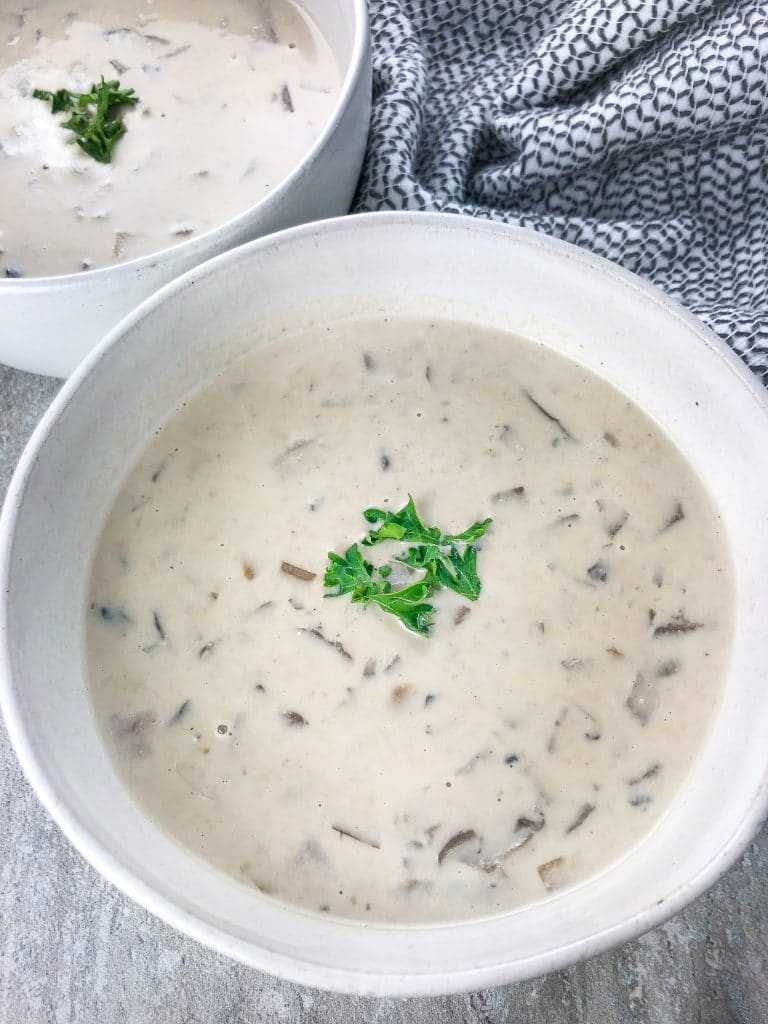 This Cream of Mushroom soup will shock you because it's thick and creamy without any dairy or flours used.

It's also oil-free and gluten-free, but doesn't compromise on flavor!

It's super easy to prepare and so much healthier than what you'll find in the store.

This recipe can be used meal prepped and stored in the freezer for a quick meal later on. 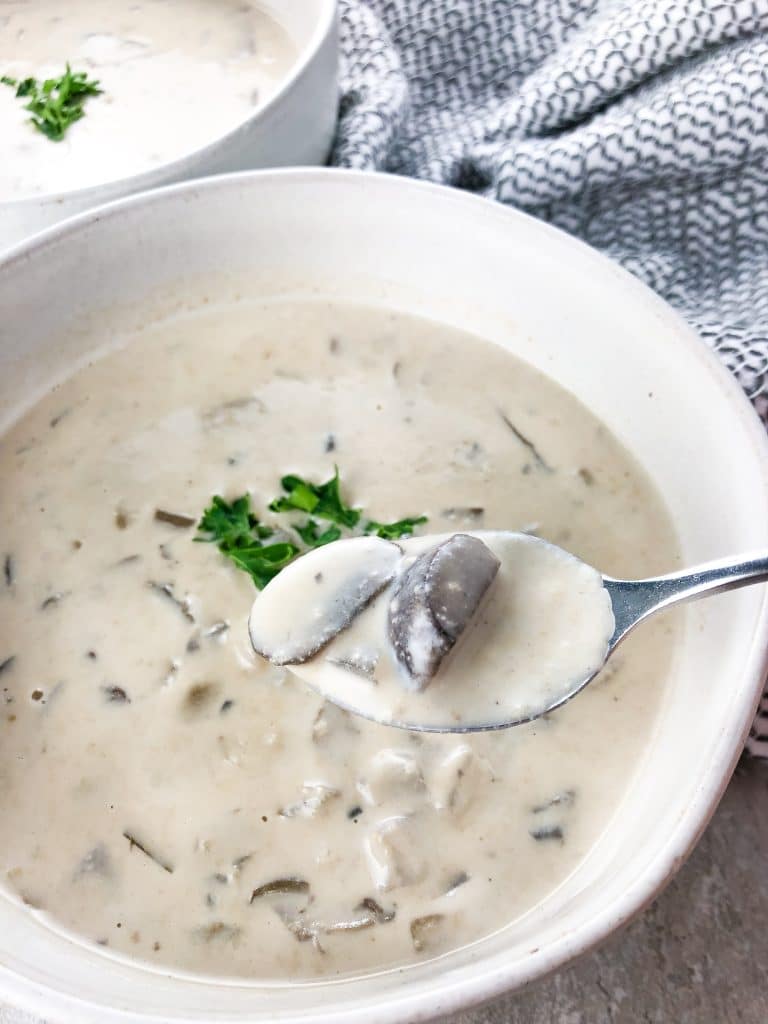 Why homemade is better

Cream of mushroom soup, from the canned soup aisle in the grocery store, was one of my favorite soups growing up.

It wasn't the healthiest as it was filled with dairy and preservatives, plus high in sodium!

I remember I use to feel so weighed down after eating it because dairy will do that to you.

This healthy version cream of mushroom soup gives the opposite feeling.

It actually makes me feel great because everything in it is nutritious.

Like anything else, homemade is always best because you know what's going in your food.

No preservatives, real ingredients and you can control the amount of sodium.

This soup is perfect during cold season because mushrooms help boost your immune system.

We should all be eating mushrooms often for optimal health. 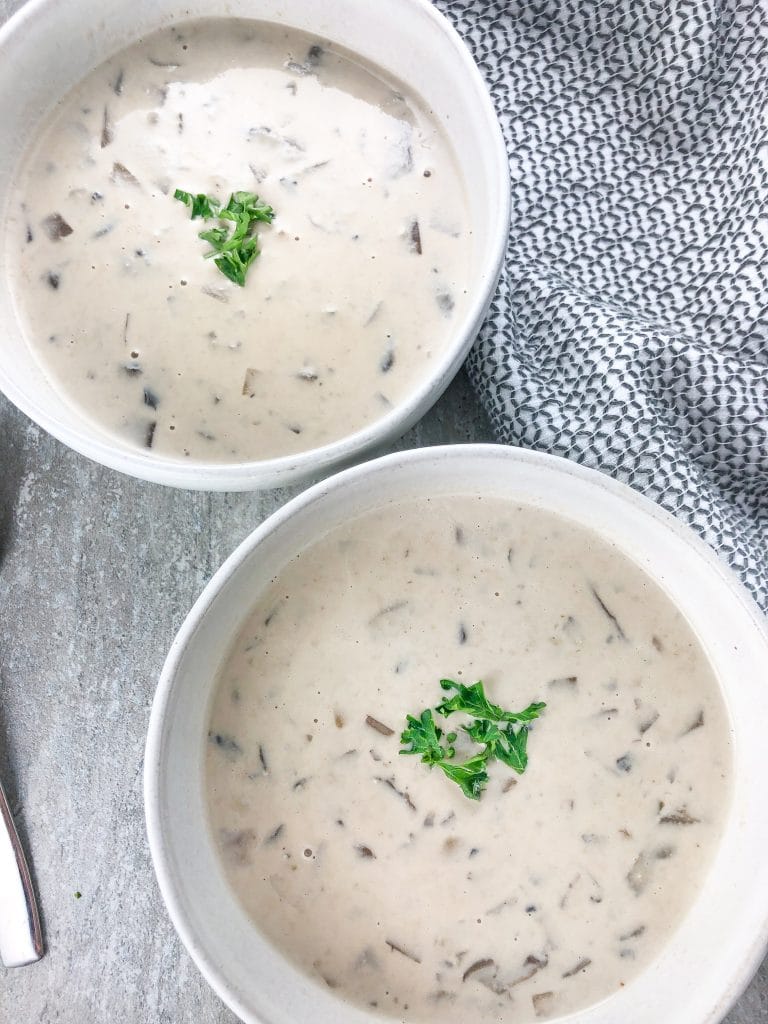 Tips for the recipe

For this recipe I use homemade cashew milk and cashew sour cream (recipe below) to give it it's thick, creamy texture.

Both of these can easily be made from scratch in minutes!

Other non dairy milks will work, but it might change the flavor. I recommend using unsweetened, non-dairy milks with no added flavor.

This Cream of Mushroom recipe makes a big batch so it's great if you're feeding more than two or if you love leftovers.

My husband and I both have big bowls of this for dinner, and there is always leftovers for both of us to have for lunch the next day.

You can easily cut the recipe in half or freeze for later what you don't eat. 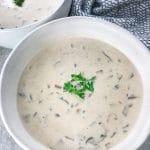 This Cream of Mushroom soup will shock you because it's thick and creamy without any dairy or flours used to make it. It's also oil-free and gluten-free, but doesn't compromise on flavor! Please use all organic ingredients when possible!
Course Lunch or Dinner
Cuisine American
Keyword Cream of mushroom, dairy-free, mushroom, oil-free, soup, vegan
Prep Time 10 minutes
Cook Time 10 minutes
Total Time 20 minutes
Servings 1 2-4 people
Author Megan Lawson Evans

This makes a thicker, creamier soup. If you want it a little thinner replace one cup of the cashew milk with a cup of vegetable broth.
Tweet
Pin135
Share154
289 Shares
Previous Post: «

Why Weight Loss Should NOT Be Your Goal
Next Post: Get The Gift Of Health For Valentine’s Day 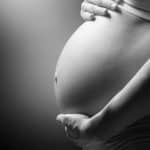 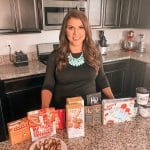 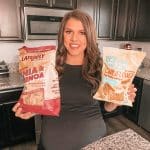 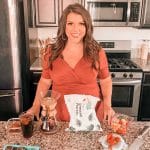 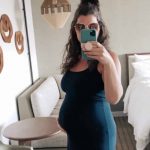